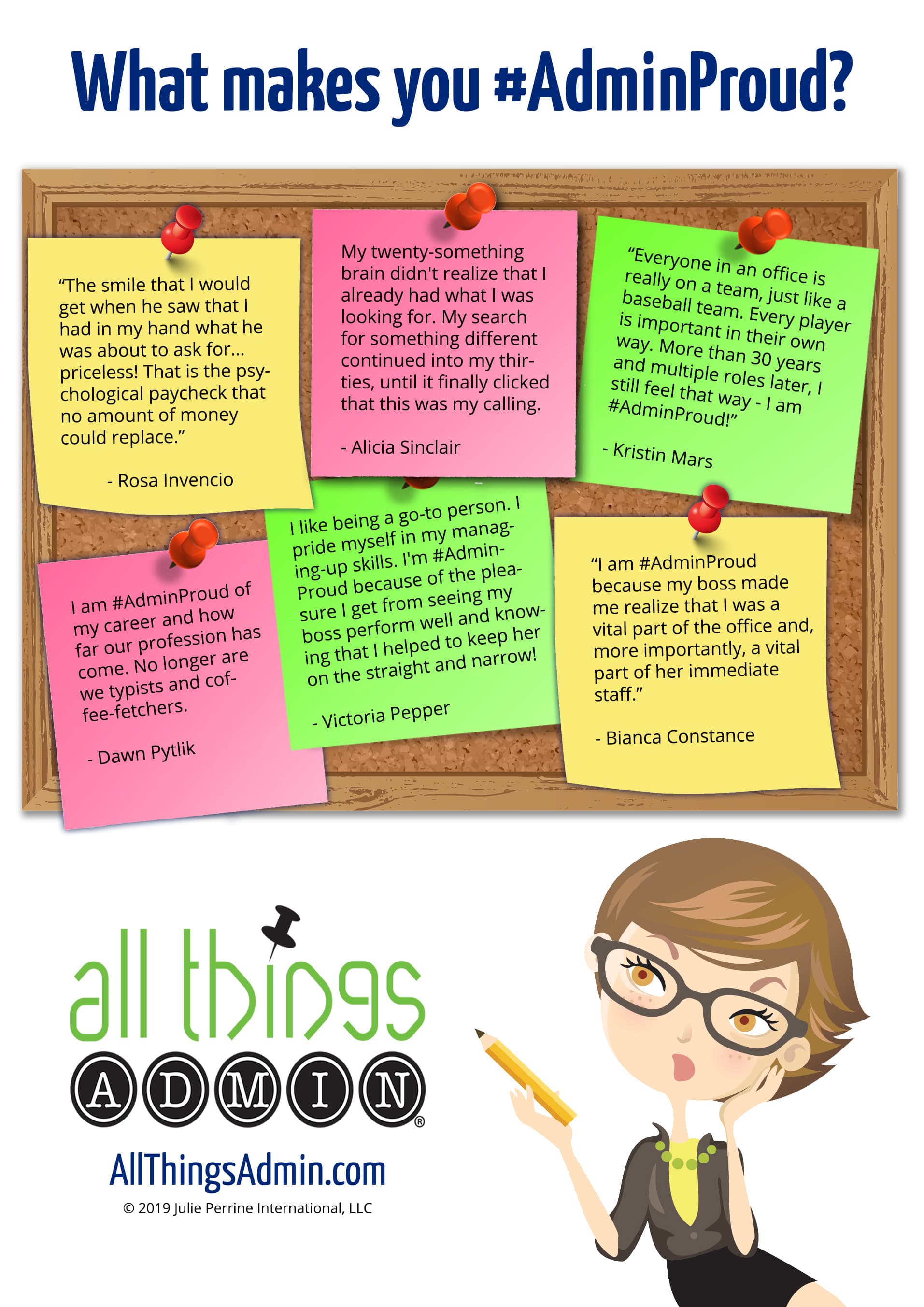 April is Admin Appreciation Month and we’re celebrating you! Recently, we asked our audience to complete a brief survey about the importance of the admin profession. Specifically, we wanted to know why our admins chose their career path, and what makes them #AdminProud.

The responses were nothing short of fantastic! Hundreds of administrative professionals from around the world were kind enough to share their stories with us – and now, we’re sharing them with you!

A character on a television show was part of the reason Rosa Invencio, an executive assistant from Boston, got into the admin profession.

“I am #AdminProud because I know that in reality, secretaries run the world! I intentionally became a secretary (not a dirty word, by the way) because of three people in my life — my grammar school secretary (Mrs. Alexandria), a high school assistant principal’s secretary (Martha), and a M*A*S*H character named Walter ‘Radar’ O’Reilly, the company clerk. Radar knew what the colonel needed before the colonel even figured it out, and he was just there with it when the colonel asked for it. I got to experience that with a previous employer, and the smile that I would get when he saw that I had in my hand what he was about to ask for…priceless! That is the psychological paycheck that no amount of money could replace.”

For Alicia Sinclair, an administrative specialist from Los Angeles, the journey was a bit more complicated.

“When I was a little girl, my mom worked in an office and I loved going to work with her on the weekends. I would sit at the empty cubicles and pretend I was stapling, writing, and organizing papers. I was pretending to be important, answering questions no one was asking. When I became old enough to work, retail and food industries were repulsive to me, so naturally I ended up working for a lawyer as a transcriber at 16. I moved on to become a clerk and admin specialist at my current employer at 18. Oddly enough, I began to despise my job as an admin, but I kept getting promoted because I was good at it. I was young and wanted to do something else. Something fun, interesting, important, and where I was in charge. My twenty-something brain didn’t realize that I already had what I was looking for. My search for something different continued into my thirties, until it finally clicked that this was my calling. Looking back, I don’t believe I chose the admin role, I believe it was a gift bestowed upon me.”

Victoria Pepper of Nottinghamshire, U.K., gets her job satisfaction from the success of others.

“I like being a go-to person. I pride myself in my managing-up skills. I’m #AdminProud because of the pleasure I get from seeing my boss perform well and knowing that I helped to keep her on the straight and narrow! My favorite saying is, ‘I’m not bossy, I just know what you should be doing!’”

Dawn Pytlik, an office coordinator and executive assistant from Western New York, paints a fantastic picture of the profession then and now.

“It was the disco era. I had Cher hair. Math and I were not very good friends. Guidance counselors back in the day said, ‘Do something you like.’ I was good at English. Every company had a secretary. There were lots of jobs. (Not bad foresight from my disco-era younger self!) My first foray into being a secretary was in the middle school office assisting the principal’s secretary during my study hall. Fast forward to 2019, I am #AdminProud of my career and how far our profession has come. I am still friends with my middle school mentor. She is 89. It has been a great ride seeing how our profession has evolved through technology, and how we are now strategic partners. No longer are we typists and coffee-fetchers.”

Bianca Constance, an executive assistant from New York City, never planned on being an admin.

“My career chose me. My undergraduate and graduate degrees are both in music performance. (I’m a trained opera singer.) By the time my voice was marketable, I was deemed too old. While in school, I always had some kind of clerical job, mainly in word processing centers. It was when I got my first job as an executive assistant that my boss took me aside and said, ‘you need to belong to a professional association that will help you with your professional development.’ That’s when I realized this really was a profession and not just a day job. I am #AdminProud because she made me realize that I was a vital part of the office and, more importantly, a vital part of her immediate staff.”

In contrast, Kristin Mars, a legal assistant from Amsterdam, New York, always knew the admin profession was her calling.

“I can’t remember a time when I didn’t want to be a secretary. My business courses in high school were my favorite. I volunteered during study halls to work with the admin in the superintendent’s office, and I spoke at my high school graduation ceremony on “Why I want to be a Secretary.” My speech was centered around how everyone in an office is really on a team, just like a baseball team. Every player is important in their own way, and in some ways the secretary is just as important as (or sometimes more important than) the boss when it comes to finalizing details and ensuring quality performance. More than 30 years and multiple roles later, I still feel that way – I am #AdminProud!”

For Vicky Schmitz, an administrative assistant in Chicago, it’s a family business.

“Second generation EA. I saw how hard my mother worked at her profession and what skills, talents and judgment she brought to it. I learned those same skills and have the same talent for organization, judgment, problem-solving, and desire to perform as she had. I’m #AdminProud because of her model, expectations, and selflessness.”

We are grateful for all of our #AdminProud admins. Keep the stories coming! We’ll be sharing more on our blog and social media pages throughout April. 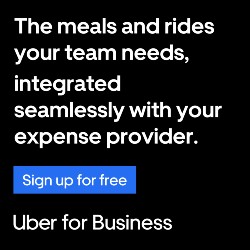 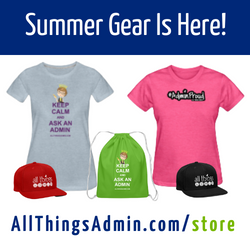